Monica Simpson believes that the power of the people will win 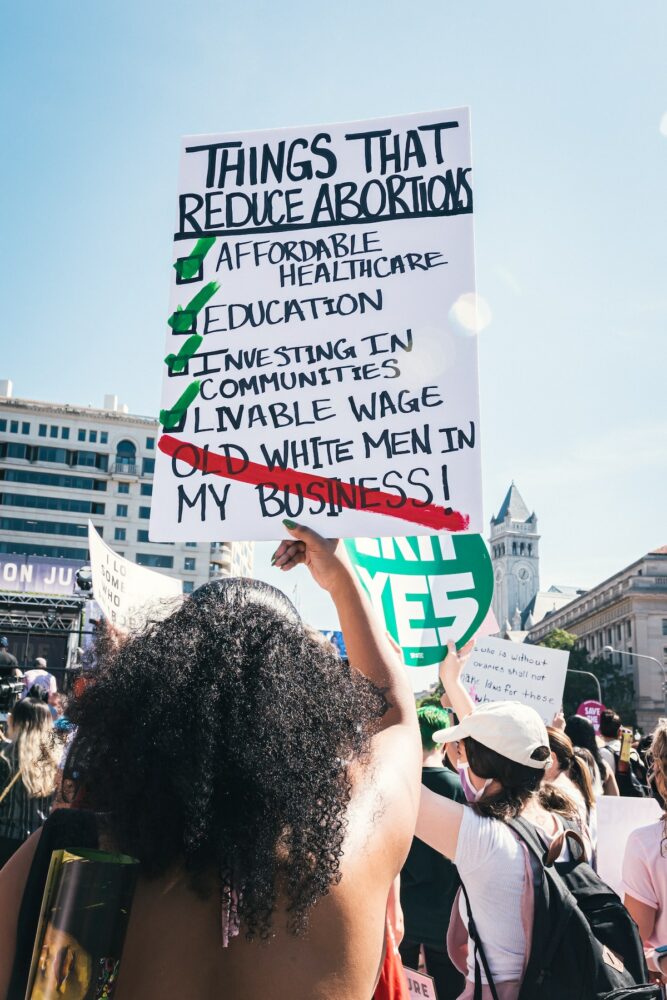 Photo by Gayatri Malhotra on Unsplash.

Monica Simpson has made fighting for reproductive justice her life’s work. The executive director of the Atlanta-based organization SisterSong works at a grassroots and national level to help build better policy and influence systems change for reproductive rights in America’s marginalized communities. Simpson, as a longtime reproductive justice activist, knew the Roe v. Wade decision was coming—but that didn’t make the news any less jarring. We called her up to talk about life in a post-Roe world, what SisterSong is doing at the grassroots level, and why she’s so hopeful for the future.

Where is your head at post Roe? You obviously knew, after the leak, it was coming down. But what was your initial reaction?

I remember the day the decision came down, my family was here with me. I was all set to have family time with my nephew and my mom. I thought I was going to have an easy weekend. And they decided to bring this news down on that Friday. Even though this is something that reproductive justice folks will say we knew was coming, it still felt like a punch in the stomach. I felt like my air left me for a moment. I looked around the room at my mother thinking about her generation, I looked at my nephew thinking about the future. Then we went into direct action mode.

We did. We started to engage people in the streets as much as possible. There were many different actions that we were a part of: demonstrations, marches, rallies. In D.C. Across the south.

We organized Black Bodies for Black Power, one of the first national demonstrations [on abortion rights] led by Black leadership and directly for Black communities. So we were engaging with that community. Using their voices and showing their outrage, because that is an important part of organizing.

We also knew that this was going to have this trigger effect in the States, because of all these trigger bans. We are the lead plaintiff in the case against the state of Georgia’s six-week ban. So we had to be on our toes and ready to support whatever was going to happen in Georgia.

So amidst all this craziness your team is also preparing for this huge case.

We’re preparing for the case and working with our legal counsel at the ACLU to look at all of the avenues that we can take to go against this ban that came down. Service providers were not ready for it. Patients were literally in doctor’s offices on that day and were told that they had to leave. It was such a sad day.

What are you hearing in your community across the south right now?

The big thing that’s coming from our folks is they are very scared about what this means for their health. We live in a region where Medicaid hasn’t been expanded in most of the states. Folks are just like, what does this mean ultimately for our health care? And one of the messages that we’re getting is that the government doesn’t care about it at all. They are willing to use our health and our bodies as political tools for their own agenda.

People are also very concerned about criminalization. If they are living in a state where they have to cross state lines to get access to an abortion, what does this mean for them? Especially in communities of color, who are already targeted and already under just so much fear of criminal injustice.

They already have a target on their back.

Exactly. And this adds a layer of fear. I also think that people are looking to voting as a big part of how we can shift a lot of this. Of course, voting is absolutely important. But we know in the south in particular—and now at the federal level—we’ve seen so many attacks on voting rights. So the thing that we would use to actually shift power and to move us in a different direction—they’re already coming after that too.

Obviously the ballot box is hugely important and instrumental. Look no further than what happened in Kansas. But I’m curious what you’re doing and what SisterSong is doing at a grassroots and community level right now, beyond the lawsuit against the State of Georgia.

We have three key states that we are deeply rooted in right now: Georgia, North Carolina, and Kentucky. We are doing a lot of work around building partnerships across different movements. Because we know that we need deeper relationships across movements to fight this.

The other thing is, we’re a big convener of people. That’s something we’ve had to navigate living through this global pandemic that we’re in—but we’re still doing that work to convene people as much as possible to do that deeper strategic thinking around how we want to do policy shift work.

What does that look like? Is it like a board meeting? Or is it more, like, hey Angela from down the street can come and express her opinion too?

We are working to bring in Angela from down the street and Lisa from around the corner! [Laughs] We’re trying to build that bridge. So that it’s not just the movement leaders who are the only ones in this conversation. Our commitment is to make sure that this is a grassroots effort.

So in our convenings we say hey, if you’ve never even come to a meeting before, this is the time for you to show up. If you’ve never been to a conference before—that’s not even something that you even thought about—we have scholarships to make sure you can get there to be in these conversations to get the education. We have to create the next wave of leaders in this fight, because this is gonna be a long term fight. It’s not just going to be us folks who are currently doing it right now holding this down for the next 20 years. This is something we have to get people prepared for. So we’re using our spaces to do that.

You probably get asked this multiple times a day, given the recent news. But: how do you feel about the future?

My answer is still the same. I believe that we will win, I believe that there’s no system that can defeat people power and the power of the people. I just don’t believe that. I’ve seen throughout history that when we come together as a people  for a collective good—that energy, that passion, and that push moves us to where we need to be.

It’s been interesting talking about what it means when we think about moving sexual reproductive health and rights into [a broader] space. It has been such a taboo topic. But now we actually get to talk about it—and I am so excited about that. We finally can say that we can’t have conversations about black liberation, economic justice, or voting rights without talking about sexual reproductive justice.

I’m excited about the future. And I do believe that we will win. We have a long fight. It is going to require us to think completely outside of the box. I don’t think our strategies from before are going to be the strategies that get us there—and I’m excited for us to create new ones. I’m really excited about what this means for the next generation of leaders that are now coming into the movement because of this work. So I’m very optimistic about our future, even in the midst of the craziness.